Mr. King and His Courtiers

ALG Editor's Note: In the following featured editorial by the Wall Street Journal, pay-to-play again comes to the forefront in New Mexico, this time from the state's Attorney General:

Mr. King and His Courtiers 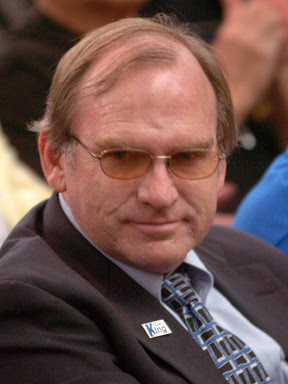 The curious case of the law firm and New Mexico's AG.

Some public officials are touchier than others. Take Gary King, the New Mexico Attorney General, who reacted to our recent passing reference to him by denouncing us and calling our pay-to-play facts nothing but politics. That sounded like an invitation to investigate Mr. King further, and, sure enough, he deserves an editorial all to himself.

For that matter, the entire state of New Mexico could use a little more sunshine disinfectant. Last week brought news that Governor Bill Richardson's campaign and political action committees received nearly $200,000 from money managers and brokers who were seeking access to the state's multibillion dollar pension funds. The donations included $20,000 from Steven Rattner, the Treasury Department car czar. Mr. Rattner used to run Quadrangle, a private equity firm that was handed $20 million in state pension cash to invest in 2005.

As for Mr. King, he is underselling his political talents. Campaign records show that in the month before his 2006 election, his campaign received $50,000 from Houston lawyer Kenneth Bailey and Mr. Bailey's previous law firm in two $25,000 installments, one of which came within a week of Election Day. The law firm where Mr. Bailey currently works had been hired by the state on a contingency-fee basis to sue Janssen Pharmaceuticals. Mr. King says any suggestion that these campaign contributions played a role in the Bailey, Perrin & Bailey firm receiving the contract is nonsense. Well, you decide.

In an interview, Mr. King told us that the original contract with Bailey Perrin was arranged by his predecessor, Patricia Madrid. This is true but hardly settles matters given that Mr. Bailey also gave $25,000 to Ms. Madrid in 2005. Mr. King renewed the Bailey Perrin contract last year without soliciting bids. Mr. King said that was done for continuity, not to reward a campaign donor. And this is where things get interesting.

State records show the original contract with Bailey Perrin expired on June 30, 2008. Mr. King's office didn't renew it until November 24, 2008. So we asked Mr. King about this five-month gap in which a private law firm was apparently representing the state without any legal authority to do so. "This is what I believe happened," said Mr. King. "My contracts people didn't notice that that contract had expired." He added: "I have to talk to my lawyers about what happens when a contract expires in the middle of a lawsuit and somebody continues on [litigating]. But I think our laws probably cover that."

They'd better, because court documents show that it was during this five-month period, on July 29, 2008, that the lawsuit and summons were served on Janssen. Mr. King says he isn't concerned about the contract gap. We'll have to see what Janssen's lawyers make of it.

It's possible that the lapsed contract was an innocent mistake that happened to go unnoticed until late November of 2008. Then again, it's also possible that Mr. King didn't want to renew the contract earlier because Bailey Perrin might have been required to disclose Mr. Bailey's generous campaign contributions to Mr. King back in 2006. A New Mexico law says that prospective contractors with the state must disclose political donations above $250 made in the previous two years. We can see how Mr. King would prefer to have that law firm-contractor gift kept under wraps.

Mr. King insists that state AGs often have no choice but to enter these relationships with private lawyers, even if doing so jeopardizes the neutrality of prosecutors because lawyers working on contingency-fee contracts have a financial stake in the outcome. "I have a total of 80 lawyers and my total budget is about $16 million a year," he said. To handle complex litigation, "we pretty much have to hire law firms to do that." However, you have to wonder just how vital this particular lawsuit is, since it was marketed to New Mexico and many other state AGs as an off-the-shelf product by the Bailey firm.

Mr. King added that whether or not these arrangements appear to be pay-to-play is a "valid question, and I think AGs around the country have been discussing it." That's certainly a change of tune from a week ago, when Mr. King was declaring that our reporting was an invention of his political enemies.

Moreover, some state AGs -- not Mr. King -- have been leading efforts to limit these unholy alliances and add transparency to state hiring. In Florida, Attorney General Bill McCollum's office has voluntarily adopted strict guidelines that require competitive bidding for contingency-fee contracts and that cap attorneys fees. At his urging, legislation that would do both has cleared the Florida House and could be voted on soon in the Senate. Colorado, Connecticut, Kansas, Minnesota, North Dakota, Texas and Virginia have also passed laws to ensure that if private lawyers must be hired, they put the state's interests ahead of their own.

Mr. King and New Mexico ought to join their ranks.